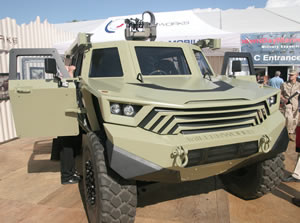 The USMC is expected to publish the Joint Light Tactical Vehicle (JLTV) request for proposal (RFP) at the beginning of the coming year (2008), and select manufacturers for the new family of vehicles by the end of March. Initial operational capability originally scheduled for 2010 was recently pushed back to 2012, as the services are focused on the acquisition of heavier and more urgently needed Mine Resistant Ambush Protected vehicle (MRAP) in the near term. However, all officials are stating that JLTV and MRAP are two different vehicles, providing for different missions. While MRAP is addressing more urgent gaps in force protection, JLTV is fulfilling current and future requirements for all-terrain tactical mobility, maneuverability, sustainability as well as air transportation and strategic mobility (including sealift).

The JLTV specifications will be focused more closely on the replacement of specific vehicles such as the HMMWV, offering balanced and improved capabilities, in mobility, protection and performance. An important parameter for the JLTV success will be its reduced life-cycle cost. The new family of vehicles will use of common spare and repair parts at the sub-assembly and component level, facilitating optimized management of logistics (parts inventories), maintenance and support.

Armor protection is one of the key elements of the future JLTV program. All JLTVs are expected to be protected against explosions and mines and IEDs utilizing V shaped hulls, although this specific design has not been made mandatory. The basic vehicle will also be bulletproof, addressing specific A kit requirement is to be defined by the military. Since baseline armor is part of the vehicle, additional armor weight represented by the add-on B-kit, will facilitate net protection, since all the structural elements and attachments carrying the appliqués armor kit will already be provided in the baseline. (Further reading: JLTV Pathfinders – CTV)

The Combat Tactical Vehicle (Technology Demonstrator) is a six passenger combat variant within the JLTV family of vehicles. The Nevada Automotive Test Center (NATC) is developing a technology demonstrator for the combat tactical vehicle (CTV), under contact for the Office of Naval Research (ONR). The vehicle is undergoing performance testing and Marine Corps evaluation at NATC proving ground in Nevada. The tests incorporate comprehensive cross country mobility and ballistic testing of several armor solutions, to be integrated into the vehicle’s final design.

Lockheed Martin unveiled its version of JLTV at the Modern Day Marine (MDM) and AUSA exhibitions in October 07. The company is leading a team with BAE Systems to provide high volume assembly and armor manufacturing; Alcoa will support vehicle design and JWF Industries to produce various assemblies. Other suppliers include Axletech, Lotus, Cummins and Allison transmission. The vehicle is designed with “MRAP-like” survivability and protection based on ‘modular’ survivability.

At AUSA 07 Oshkosh displayed their JLTV utility vehicle (JLTV-UT) technology demonstrator. The vehicle is expected to begin testing at the NATC before the end of 2007. Since Oshkosh based its concept vehicle on mature technologies, they decided to focus on conventional diesel engine rather than hybrid electric propulsion. According to Oshkosh, this is what the USMC client is conveying. A similar approach has been adopted by Lockheed Martin for their JLTV vehicle, unveiled in Washington DC in early October, at MDM and AUSA 07.

In contrast to these diesel powered vehicles, General Tactical Vehicles, a joint venture between General Dynamics Lnd Systems (GDLS) and AM General is pursuing a more ambitious approach introducing their Advanced Ground Mobility Vehicle (AGMV), promoted as a JLTV concept vehicle. GDLS and AM General invested over $10 million for risk reduction development and maturation of this vehicle and its innovative In-Hub Hybrid Electric Drive system.

A concept vehicle developed by MillenWorks, displayed at both shows is demonstrating several critical technologies that could be integrated in future military vehicles. The company showed its light utility hybrid (LUV) vehicle, was developed by MillenWorks with support from TRADEC and national Automotive Center (NAC). The vehicle has a gross weight (GVW) of 18,500 lbs (8391 kg) and curb weight of 14,500 lb (6,577 kg). This air transportable vehicle can be carried internally in a C-130 aircraft and CH-47 or CH-53 helicopters. Textron Marine and Land Systems is planning to utilize this platform to develop advanced component technologies for future tactical ground vehicles. The company recently announced teaming with Boeing to compete for the future JLTV production. Boeing is also the prime contractor for the US Army’s Future Combat Systems program, which includes seven manned ground systems to be powered by electric drive systems. (Further reading: JLTV Pathfinders – Hybrid Electric Vehicles)