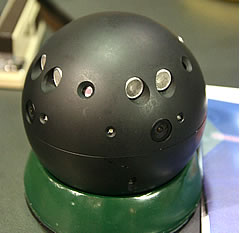 Robotics and remotely Controlled Weapons: A number of unmanned ground vehicles, remote weapon stations (RWS), panoramic vision systems and ancillary equipment were on display at MDM and AUSA, representing the growing interest in these systems. RWS are becoming integral element in modern combat platforms – not only on armored vehicles, but also on tanks, aircraft, and naval crafts and even robotic platforms, where RWS are empowering telepresence with lethal power, as robots are assuming more and more combat roles.

Lockheed Martin hosted several robotic platforms. One of these applications was the Scout Ball, a baseball size sphere made of LEXAN, weighing less than one kilogram. Scout Ball is equipped with visual and IR cameras, microphones, position sensors, signal processing and data recording. This ball can see, hear and store information as it monitors its surroundings. The Scout Ball was developed by MobileFusion and is designed for military, law enforcement and firefighting applications. The Scout Ball system includes two spheres and a monitor based on a Toughbook 30 laptop and a battery charger. The Scout Ball can also be used as an unattended mobile sensor, attached to an aerial or ground robot. (See also Eyeball-1 and SpyBall)

Elbit Systems introducing at MDM 07 the latest version of its Versatile, Intelligent, Portable Robot (VIPeR). This small robot was developed for the Israel Defense Forces (IDF) within the framework of its Portable Unmanned Ground Vehicle (PUGV) program, and in close cooperation with The Israeli Ministry of Defence’s Directorate of Defense R&D (DDR&D). Following operational evaluation, the IDF plans on fielding VIPeR in its infantry platoons. The VIPeR is one of te robotics platforms considered for the IDF future dismounted combat team. It will be able to carry a small electro-optical payload, acoustic sensors and light weapons. (See also SpyRobot RW and PacBot Early)

For example, the small RMP 50 weighs only 70 lbs (32 kg), but has a maximum payload capacity of 75 lb (34 kg). The RMP 400 has even better ratio – at a curb weight of 240 lbs (109kg) it can carry 400 lbs of payload (181 kg). These robots are designed to operate at a range of 10 – 15 miles (16-24 km) at an off-road speed of up to 18 mph (29 km/h). The RMP robot is powered by 48 NiMh batteries while the larger models use multiple Saphion lithium-ion battery packs. Both versions require battery recharging for 8 – 10 hours. Although these are well adapted to harsh field conditions, the batteries temperature tolerance limit their operational use from -10 to +50 C. This range could be expanded by using different batteries, which could be more suitable for sub-freezing conditions. (Some Saphion cells operate as low as -20C).

The complete MAARS system weighs about 350 pounds. The chassis is constructed as a uni-body frame fitted with easier battery and electronics accessibility. Other features include a larger payload bay, higher torque, creating faster ground speeds and improved braking. An EOD MAARS will be equipped with a new manipulator arm having a nominal 100 lb lift capability. The arm can quickly replace the turret mounted M240B weapon, literally transforming from a remote weapons platform to an Improvised Explosive Device (IED).