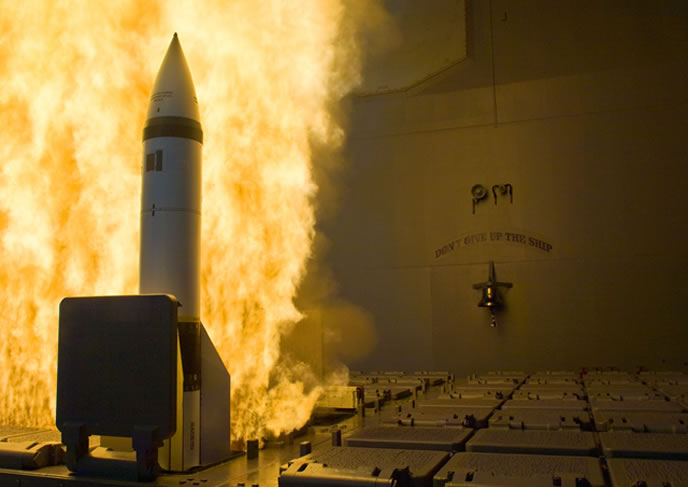 Three companies were awarded development contracts in 2010 to demonstrate conceptual designs for the Next Generation Aegis Missile (NGAM) – Boeing, Northrop Grumman and Lockheed Martin. While Raytheon, the manufacturer of all Standard Missiles has not been mentioned in relation to this future program it is likely that they will again partner with Lockheed Martin for this development. The two companies have recently extended their AEGIS cooperation to support the Ground Based Interceptor missile.

NGAM has entered preliminary development phase in November 2010. This new capability will rely on the ‘Standard Missile 3 Block IIB’ (SM-3 Block IIB) sponsored by the U.S. Missile defense Agency. The new missile will enhance the capabilities of future AEGIS cruisers to defeat ballistic missiles by extending their range and sensor capability to target ballistic missiles on the ascent phase of their flight.

The missiles currently used for missile defense are SM-3 Block IA, first generation Aegis BMD missiles. These missiles are deployed on 24 Aegis BMD-equipped warships – 20 in the U.S. Navy and four in the Japanese Maritime Self-Defense. Twelve additional ships have been identified for modification to perform ballistic missile defense in the next 3 years. These vessels are all operating the Aegis version 3.61 weapon system.

The second-generation Aegis BMD Weapon System (Version 4.0.1) is already integrated on CG-70 Lake Erie. This system is designed to defeat more complex ballistic missile threats. Aegis BMD 4.0.1 includes the BMD signal processor, which improves target identification. The new version marks the beginning of the transition to the Navy’s open architecture – a transition that will be complete with software upgrades, known as Advanced Capability Build 12. Certification and deployment of the new system is scheduled for September 2011.