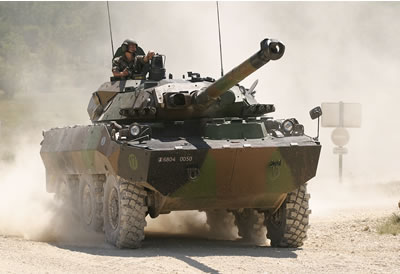 VBCI, the new troop carrier for the French Army is progressing. In 2004 the first VCI infantry carrier was delivered and in 2005, the VPC command vehicle were introduced to the French Army. Future VCI ERYX / Milan anti-tank and mortar vehicle variants are also considered. The vehicles have been tested in both urban and cross country environments. By 2008, GIAT will deliver the first batch of 85 vehicles. The complete program calls for the production of 700 vehicles (550 VCIs and 150 VPCs).

Further development is focused on future 6×6 vehicles, replacing the current fleet of 4×4 and 6×6 Renault VAB vehicles, in service for the past 30+ years. Such developments are expected to be undertaken under a collaboration agreement between France and Germany. Future 6×6 vehicles are expected to field new technologies such as hybrid electric propulsion, advanced protection, modern vetronics etc. Some of these technologies are already under development in various R&D programs by the current partners.

On a similar note, BAE Hägglunds also displayed its two modular armored tactical SEP platforms, which have already completed 8,000 kilometers of test drives. Four test vehicles are currently involved in the program. The first, tracked vehicle tested the electric drive, silent run (battery only) capability, rubber band tracks, and other automotive elements. The second vehicle was the 6×6 wheeled platform, followed by the third 17.5 ton vehicle which tested a more mature electric drive and gearbox. The fourth vehicle to join the team is a 17.4 ton tracked vehicle. An 8×8 variant is currently in production and is expected to enter testing by the end of 2006.

In France a parallel R&D is underway to evaluate the benefits of hybrid electrical drive systems for medium armored combat vehicles considered for future systems such as the French EBRC and British FRES. GIAT is building the Demonstrator Propulsion Electric (DPE), a 6.3 meter long, 3 m wide 6×6 18 ton troop carrier which is designed to travel up to 750km at 60 km/h powered by a diesel/electric hybrid system (the vehicle has a top speed of 105 km/h), or 15 km at a speed of 30 km/h, utilizing its battery powered, all-electric “stealth mode”. The vehicle will enable variable ground clearance, from 30 to 52 cm. thus having the potential to reduce height or improve cross obstacle mobility when required. Completion of the initial test vehicle is expected by summer 2006.

The French Army is gradually improving all its armored vehicles, which are expected to remain in service for the next 10 – 15 years. As part of this initiative, improvements for the AMX-10RC continue with scheduled modifications planned for up to 256 French Army vehicles. Under this program the vehicles received new command and control systems and PR4G radios. Among the modifications underway are the installation of GALIX smoke dischargers, LIRE and DAL countermeasures systems, as well as appliqué armor, an improved NBC system, various mobility improvements, installation of SIT-V1 battle management systems and improved fire control systems. First series production upgraded vehicles were delivered to the French Army in 2004. Future modifications could also include replacing the 105mm gun with the new 120 FER, currently in development.