At the time 8×8 armored vehicles are dominating world markets, the introduction of new tracked armored vehicles is unusual. Still two new tracked vehicles were unveiled at Eurosatory 2006 – the Swedish CV90120-T and the German Puma Armored Infantry Combat Vehicle. The CV-90120 is a new member of the BAE Systems Hägglunds CV90 family of which over 1,000 tanks and AFVs have been produced to date. It is the first member of this family to be armed with a low-recoil 120mm gun and introduces innovative soft and hard kill protection to augment the basic light armor. It was designed from the beginning to operate in either high intensity or asymmetric warfare. Both vehicles were displayed were equipped with a  wide range of new weapons, armor and protection, optronic systems, C4I and vetronics.

The Puma will be the new Armored Infantry fighting Vehicle (AIFV) developed for the German Army. Display of the prototype at Eurosatory 2006 was the first time this new vehicle was presented to an international audience, only one month after its official rollout in Germany. The vehicle was displayed by the German manufacturer PSM GmbH – a joint venture of Krauss Maffei Wegmann and Rheinmetall Defence. The German Army is expected to procure 405 vehicles for a total cost of 3 billion Euros. Initial production orders are expected by mid 2007, following parliamentary approvals. PSM is currently working toward the delivery of five pre-production vehicles, under a previous order issued in 2004. Puma is equipped with an advanced 30mm automatic cannon firing AP or ABM munitions. 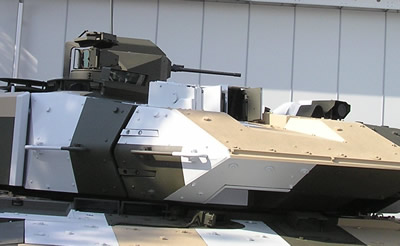 Under a parallel program to the Leclerc AZUR, upgrades to 108 AMX10P tracked APCs are underway. The modifications  including installation of appliqué armor, and mobility improvements including modified suspension, gearbox and rear ramp. The first modified vehicle is expected to be completed by January 2007.The AMX-10P will eventually be replaced by the new wheeled VBCI, currently undergoing qualification tests. Several versions of VBCI will be produced. 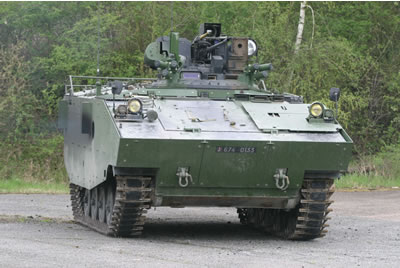