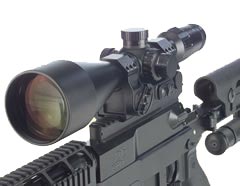 Firing under ‘perfect conditions’, modern sniper weapons, particularly the high power ‘Anti-Material Rifles’ enable a professional marksman to score a ‘perfect first-hit shot’ at long range. Taking advantage of such weapons’ capabilities, snipers are required to accurately hit targets with the first round, under all battlefield conditions, with maximum effective range of their weapon. Accurate range measurement and prediction of environmental conditions (temperature, wind intensity and wind gusts downrange) are critical in producing such first shot hits. “Winds of 5 to 10 miles per hour significantly decrease the probability of a sniper hitting a target, requiring a second attempt, which increases the sniper’s own probability of detection,” said Ron Rex, Lockheed Martin’s One Shot program manager. “Since wind is transparent and gusts are virtually impossible to time and estimate, even a light gust has huge impact on the hit-probability, missing the target by over 1.5 meters at distances as short as 400 meters.” explains Dr. Deepak Varshneya, Program Manager at DARPA’s Strategic Technology Office.

Several systems are currently under development by US-Israeli and DARPA initiatives. A joint US-Israeli development, under Israel’s Defense Research & Development Directorate (DRDD) management currently under development at ITL, utilizes a cross-wind laser measurement concept, developed by Dr Joseph Shapira from Soreq Nuclear Research Center. This is evaluating fire control systems designed to improve the sniper team’s performance. ITL unveiled a model of this system, dubbed ‘Focus’, designed as a fire control system to be operated by the sniper team spotter, supporting up to eight sniper positions simultaneously. The system employs a laser beam that instantly measures and profiles wind-flow, creating a three-dimensional model used in the ballistic calculation. Focus will provide each sniper with individual ballistic correction, based on accurate measurements of cross-wind downrange, temperature, range and inclination.

Another device called Sniper Auxiliary Attachment Module (SAM), designed for the sniper team, was unveiled by Carl Zeiss Optronics. SAM fits 6-24×72 telescopic sights enabling marksmen to receive critical information without taking their eyes off the target. SAM has been developed to solve the problem which marksmen have in preparing the rifle while still observing, identifying and targeting a threat. At a touch of a button, users receive menu-guided information on current settings enabling them to easily determine the current position of elevation and azimuth turret settings at night, plus information indicating temperature and air pressure. Data on the weapon-tilt angle and the slant error is also displayed in the user’s field of view. When added with wind direction and speed, this information is used to calculate a ballistic solution. For spotters, the new Spotter 60 provides fatigue-free observation, clarification and precise acquisition of targets at greater distances and over extended time periods . It has a variable magnification range of 20 – 60 power, an optical clear objective diameter of 72 mm and a focus range of 20m to infinity. Spotter 60 uses a MIL-DOT aiming-point sight, which reduces the difficulty in finding a target, usually experienced with such high magnification devices.

Other companies are pursuing an advanced sighting system, offering automatic down-range wind-correction to be embedded into the sniper scope. Lockheed Martin is one of several companies developing such systems under Phase 1 DARPA’s One Shot program. This aims at removing windage and range errors from the sniper’s performance. The system is expected to deliver accurate aiming solutions at crosswind conditions gusting to over 40 mph, up to the effective ranges of weapons. The ‘One Shot’ sight will provide the shooter with a continuously updated ballistic solution translated into a corrected aim point. DARPA is expected to down-select a single solution for further prototype development. One Shot is expected to offer dramatic reduction in the sniper training and qualification process.

ITL displayed their latest model of Explorer, a multi-sensor, day/night hand-held target acquisition system designed for the infantry commander, forward observer and special operations operatives. An ‘all in one’ system, Explorer packs a daylight (CCD) and cooled thermal imaging system, with navigation, positioning and target acquisition devices. The system enables the detection of a man-sized target, in daylight at a range of 6 km (2.5 km recognition) and 3.6 km at night (1.5 km recognition). The system uses an integral map display for orientation and situational awareness and supports data transfer over net-centric systems.

New sights provide snipers an HD view of their targets, two kilometers away