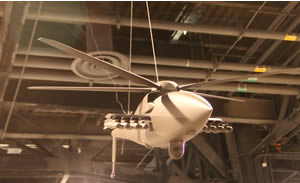 Sikorsky’s proposed High Speed Lifter (already included in our 2006 AUSA report) was present again this year, providing some additional details on the proposed design. Utilizing three turbine engines, each rated to 13,900 shp, the aircraft will use an X2 rotor system comprising twin four blade main rotors and two nine blade propellers, powering the aircraft in vertical take off and landing and horizontal flight. The aircraft will be designed for a gross weight of 158,400 lbs carrying a payload of 40,000 lbs plus 19,500 lbs of fuel. (Empty eight will be 96,500 lbs).

Designed for cruise at a speed of 240 knots, the High Speed Lifter will transition between forward and vertical flight modes without complex in-flight conversion. In hovering, the propellers will be clutched off facilitating stable low speed flight qualities. The aircraft maintain helicopter-like attributes in hover efficiency, maneuverability and agility, nap of the earth flying capability and safe descent through autorotation, low speed stability and high speed without transition. The aircraft will be built to survive combat damage, with ballistic tolerant design, use of advanced multi-spectral survivability enhancements.

BAE Systems introduced a new family of helmet-mounted display and cueing systems called Q-Sight. Weighing less than 4 ounces, the miniature display clips to any helmet, allowing the pilot “plug-and-play” ease of use. The new technology features a daylight readable display with large “exit pupil” for pilot viewing, and seamless transitions between day and night to increase pilot

situational awareness and mission capability. The increased visibility and lightweight design minimizes eye and neck strain, common problems for pilots managing the demands of longer missions and increasingly complex rules of engagement. Additionally, the decreased size and weight of the display allows the pilot complete freedom of movement within the cockpit.

A common denominator between several new systems unveiled here at AUSA 07 was the transformation of the robotic platform from a hunter into a killer. Almost all systems were presented with weapon’s mounting options, some as a modification and others, as their main capability. Here are few examples.

Developed under DARPA’s Hummingbird Vertical Take-Off and Landing (VTOL) Unmanned Aerial Vehicle (UAV) program, the Boeing A160T is currently in production for DARPA testing and for the US Special Operations Command. The original piston engine powered Hummingbird flew for the first time in 2002. Currently 11 A160Ts are in production at Boeing for DARPA. The latest version, A160T (Turbine Hummingbird) offers dramatic improvement in endurance and performance over the baseline vehicle. It is designed for autonomous operations at a range of 2,250 nautical miles and mission endurance extending more than 20 hours. Its cruising speed is 140 knots and operational ceiling is 25,000 to 30,000 ft. The aircraft will be able to hover at an altitude of up to 15,000 ft.

Key to the Hummingbird’s endurance and station-keeping performance is the proprietary optimum speed rotor technology, designed to improve the engine’s efficiency by adjusting the rotation speed of the rotor according to the changing flight conditions, such as altitudes, gross weight and cruise speed. Operational A160Ts will be capable of persistent intelligence, surveillance and reconnaissance; target acquisition; direct action; communication relay and precision re-supply missions. In October 2007, A160T completed a 12 hour test flight carrying a 500 pound payload at an altitude of 5,000 feet simulating multi-sensor operational mission. The flight used less than 60 percent of the aircraft’s maximum fuel, demonstrating the advantages of the A160’s design, including its unique optimum speed rotor. The 12-hour flight followed an eight-hour flight on Sept. 27 during which the Hummingbird carried a 1,000-pound payload module. Ultimately, Boeing plans to fly the aircraft for

18 consecutive hours with a 300-pound payload. At AUSA Boeing displayed a model of an armed version of the A160T, loaded with an EO payload and eight Hellfire type missiles. The vehicle has a length of 35 feet and a 36-foot rotor diameter.

The complete MAARS system weighs about 350 pounds. The chassis is constructed as a uni-body frame fitted with easier battery and electronics accessibility. Other features include a larger payload bay, higher torque, creating faster ground speeds a

nd improved braking. An EOD MAARS will be equipped with a new manipulator arm having a nominal 100 lb lift capability. The arm can quickly replace the turret mounted M240B weapon, literally transforming from a remote weapons platform to an Improvised Explosive Device (IED).

SAIC subsidiary AMTI developed the Seeker family of small robots, designed for detection and defeat of IED threats. SAIC offers two Seeker series robots – the R500E, and R421. This UGV is covered in more details in the Counter IED section of this review.

Elbit Systems unveiled the latest version of the VIPeR – a versatile, very lightweight portable robot first displayed this year at the AUSA Winter convention. VIPeR is capable of carrying out a variety of missions in potentially hostile areas. The small robot weighs less than 12 k and is portable in a standard backpack. Its high maneuverability and payload capacity make it suitable for a wide range of combat missions, equipped with add-on sensors, modules and task specific payloads. The intelligent, small-signature system consists of a remote operator control harness, robotic platform with video, communication and weapons capability.