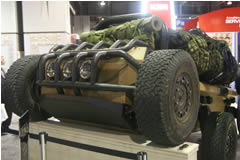 Progress was also reported with the US Army Future Combat Systems program, with lead systems integrator Boeing and its partner SAIC completing the Engineering Maturity 1 (EM1) review, a system of systems technical review of the future requirements, designs and tests, capping the program’s first of four major engineering phases. Dennis Muilenburg, vice president-general manager, Boeing Combat Systems and FCS program manager explained that this critical milestone demonstrates that the FCS program has sufficient design maturity to proceed toward the next milestone – the Preliminary Design Review (PDR) scheduled for early 2009. Meeting EM1 on schedule was also an important measure of the team’s technical success as Spin Out 1 capabilities are being delivered for the US Army for testing next year.

Among these capabilities are the network integration hardware kits, also known as ‘B Kits’, to be installed on Abrams main battle tanks, Bradley armored vehicles and HMMWVs. The kits were delivered to vehicle integrators BAE Systems, General Dynamics Land Systems and AM General, bringing the total number of B-kits delivered to date to 18. Through these interfaces, existing elements of ‘current force’ – heavy and mechanized brigades will be able to communicate and share data with FCS systems. Vehicles equipped with B-kit hardware and software will operate with the Army Evaluation Task Force test and evaluation activities scheduled to begin in early 2008.

Each B-kit comprises a Ground Platform Communications System which includes a Joint Tactical Radio System (JTRS) Ground Mobile Radio (GMR) and an Integrated Computer System, running the System of Systems Common Operation Environment (SOSCOE) software and FCS’ standard Battle Command System applications.
This communications equipment will be able to enhance networking capability to the current force, as well as improving integration with unattended sensors and unmanned ground and aerial systems, deployed in support of current and future combat elements. Muilenburg indicated that the networking systems will be fielded together with tactical- and urban unattended ground sensors (UGS) and the non-line-of-sight launch system.

The Battle Command and SOSCOE software enables interoperability between systems, prioritizing raw data from sensors such as the Tactical- and Urban-UGS slated for Spin Out 1. It enables data to be displayed on the screens of current force vehicles, providing soldiers with enhanced situational awareness. The software will be integrated seamlessly with the vehicles’ existing software for use in initial qualification and safety release test activities, that are required before soldier testing can begin. A final software release this fall, will enable control and monitoring of multiple UGS fields.