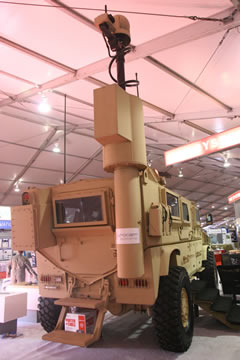 Improvised Explosive Devices (IEDs) continue to pose a challenge to coalition forces in Iraq and Afghanistan. Some of the best minds in the defense industry are searching for effective countermeasures against these threats, some were introduced at AUSA 2007. Among these were systems enabling the engagement of IEDs from stand-off distance, shooting them with machine guns or frying them with lasers; A new jammer that can better cope with the illusive radio or phone triggered devices and a low-cost robot designed to blast the IEDs with a big bang, before they are activated by the enemy.

Gyrocam has already received orders for several hundreds of systems from the USMC, Army and Navy. The company demonstrated its multi-sensor mast-mounted EO system associated with a remote weapon station proposed as an IED hunter killer. This concept seems to attract much interest with US forces in Iraq, as it provides more flexibility within standard operational practices, enabling troops to maintain significant stand-off distance while spotting, detecting and engaging suspected objects, without entering a potential kill-zone, set by hostile elements near an IED ambush site. Such flexible procedures are also less susceptible to exploitation by the enemy. Gyrocam has been contracted to supply several hundred multi-sensor mast-mounted electro-optical payloads to be used for force protection applications. The company demonstrated the integration of such payload with BAE System’s Lemur remotely operated weapon station, used as a Counter IED system.

A different method of defeating an IED from stand-off distance is proposed by Boeing, utilizing the company’s latest addition to the Avenger Agile Multi-Role Weapon System (AMWS) very short-range air defense (VSHORAD) system. Boeing recently demonstrated how energetic materials can be neutralized by laser beams from safe distance. The Laser Avenger was employed in such a demonstration on September 26-27, 2007 at the US Army Redstone Arsenal in Huntsville, Ala. The vehicle was equipped with a 1-kilowatt solid-state laser. The laser segment of Laser Avenger will have uses beyond the counter-IED, counter-UXO mission. For example, it could be upgraded to have a shoot-on-the-move capability and to blind or destroy other kinds of targets, including low-flying unmanned aerial vehicles. The laser was

added while retaining Avenger’s ability to carry other weapons, including missiles and a machine gun. Boeing plans to offer AMWS and Laser Avenger as product improvements for over 600 Avengers are deployed with military users worldwide.

Elbit Systems unveiled its latest electronic countermeasure designed to combat Remotely-Controlled Improvised Explosive Devices (RCIED). The new IED Jammer (IEDJ) represents Elbit Systems’ latest generation system, earlier countermeasures developed by Elbit and its subsidiaries have been combat proven in different war zones worldwide. The new vehicle-mounted system is designed as a modular, programmable multi-band radio-frequency jammer which denies enemy use of selected portions of the RF spectrum in the system’s vicinity. Unlike earlier generation devices using broadband ‘barrage’ to block entire wavelengths associated with suspected RCIED triggering devices (which usually cover most of the frequencies used by radio communications and cellular phones), Elbit’s IEDJ uses specific waveforms, rather than barrage jamming. Barrage can be programmed into the hardware, where required. The system can transmit on all bands simultaneously, effectively countering a wide range of potential threats.

AMTI, a SAIC subsidiary developed the Seeker family of small robots, designed for detection and defeat of IED threats. SAIC offers two Seeker series robots – the R500E, and R421. The R-500E, weighing about 30 pounds, designed for multi-use, is applied as a low-cost device, priced for mass distribution to EOD units and other commands. Employed as a forward scout, about 1,000 feet in front of the troops, the R-500E can search for suspicious objects and identify potential IEDs by ‘sniffing’ them explosive detection sensors. If an IED is detected, R-500E or its smaller ‘brother’, R-421 can deploy an explosive charge and clear the area before the detonation. The robot carries such charges on a trailer, carrying a weight of up to 25 pounds (15 punds with the R-412). R-500E is equipped with two forward looking cameras and pan-tilt camera for recon. A microphone is also used to send back information. For night operation the robot uses an Infrared LED array.