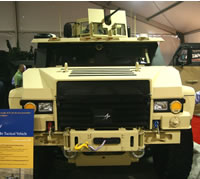 The USMC is expected to publish the JLTV request for proposal (RFP) at the beginning of the coming year, and select manufacturers for the new family of vehicles by the end of March 2008. Initial operational capability originally scheduled for 2010 was recently pushed back to 2012, as the services are focused on the acquisition of heavier and more urgently needed MRAP in the near term. Unlike the Mine Resistant Ambush P rotected (MRAP) vehicles, which are optiized for road mobility, JLTV is designed for all-terrain tactical mobility. The military is considering both diesel and hybrid electric propulsion for these platforms. This article reviews the hybrid versions and their benefits.

GDLS and AM General invested over $10 million for risk reduction development and maturation of this vehicle and its innovative In-Hub Hybrid Electric Drive system. AGMV has unique protection attributes, combining a hexagon shaped armored capsule for mine protection while optimizing also for side blast deflection and small-arms protection. At a gross vehicle weight of 14,000 – 16,000 lbs with integral A kit armor, protecting against small arms, mines, IEDs and blast, the new vehicle can carry payloads of up to 5,000 lbs and be air transportable in C-130, CH-53 and CH-47.

The vehicle accommodates an adjustable suspension reducing the vehicle’s height to meet sealift transportation clearance of 76″. The variable suspension can also be used to adjust the vehicle’s ground clearance in the range of 8 – 26.5″, thus improving obstacle negotiation. AGMV has a top speed of 70 mph, acceleration (0-30 mph) of five seconds and range of 400 miles (running on hybrid). The vehicle accommodates seven troops meeting the US Army maximum requirement. The baseline vehicle is configured for a crew of two, and can be modified into one of five different configurations. These include a four door, combat tactical vehicle carrying five soldiers (including the driver), armed with a remotely controlled weapon mount, a similar version accommodates a command vehicle with a crew of five. Another version is the utility vehicle which carries a shelter, a reconnaissance vehicle carrying five to seven troops or 6×6 tactical load carrier.

Another concept vehicle was developed by MillenWorks, displayed at both shows is demonstrating several critical technologies that could be integrated in future military vehicles. The company showed its light utility hybrid (LUV) vehicle, was developed by MillenWorks with support from TRADEC and national Automotive Center (NAC). The vehicle has a gross weight (GVW) of 18,500 lbs (8391 kg) and curb weight of 14,500 lb (6,577 kg). This air transportable vehicle can be carried internally in a C-130 aircraft and CH-47 or CH-53 helicopters.

LUV uses the Steyr Motors M16 VTI Combat diesel engine as a main engine for the parallel hybrid electric drive-train. The 215 hp engine develops torque of 400 ln/ft, coupled with an Eaton Autoshift 6 speed automated manual transmission in the rear and Klune V two speed gearbox is at the front. Two brushless, permanent magnet electrical engines are coupled in parallel to the transmission boxs, adjacent to each axle, augmenting the drive train with additional torque of 400 lb/ft each.

The electrical power contribute dramatic power surge for acceleration, obstacle negotiation and survivability, facilitating rapid egress from hot zones and reducing the chance of mobility kill due to combat damage. On idle, road travel or deceleration, the diesel charges two modular lithium ion battery packs which power the electrical drive motors. LUV has a top road speed of 76 mph (122 kph). It can accelerate from 0 to 30 mph (0-48 kmh) in 9 seconds. Its turning diameter is 9.1 meters. With a ground clearance of 18″ (46 cm) the vehicle can negotiate a vertical step of 21″ (60 cm.), gradients of 60% and 40% side slope LUV vehicle offers superior mobility, ride quality, and roll stability, utilizing semi-active Magneto-Rheological (MR) struts developed by MillenWorks.

Among the key technologies demonstrated with the new vehicle are the flexible drive-train, offering unique all-wheel drive reduced fuel consumption in urban driving and silent watch capability. Extensive onboard power is available to run electronic systems. LUV is fitted with basic armor (A kit) which can be upgraded with B-kit appliqué armor to meet advanced threats. The hull is designed as an interchangeable ‘safety cell’, protected by an integral armor and blast resistant V shaped hull.

Textron Marine and Land Systems is planning to utilize this platform to develop advanced component technologies for future tactical ground vehicles. The company recently announced teaming with Boeing to compete for the future JLTV production. Boeing is also the prime contractor for the US Army’s Future Combat Systems program, which includes seven manned ground systems to be powered by electric drive systems.
The U.S. Army Future Combat System (FCS) ground vehicle hardware development is already advancing to the next phase as the Army begins testing state-of-the-art hybrid propulsion technology on a new, fully loaded, fully integrated test bed called the “Hot Buck” developed by BAE Systems. Designed to test the US Army’s next generation hybrid electric destined for all Future Combat Systems vehicle platforms, the “Hot Buck” creates the same conditions that will exist in FCS ground vehicles, including space constraints, all of the anticipated primary and non-primary power load components, electric control, energy storage, cooling, filtration and other systems that will propel and power tomorrow’s fleet of Army ground vehicles. Subsequently to the “Hot Buck” testing, the new propulsion will be installed into an FCS Maneuver Ground Vehicle (MGV)-like platform known as the Hybrid Electric Reconfigurable Movable Integration Test bed or “HERMIT.”