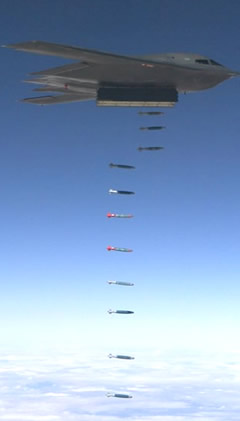 The transformation of air operations is not focusing only on the aerial dimension, the effects they create, as part of the broader campaign view. For example, as ground forces the shift from heavy to light, rapidly deployable forces such as the Stryker Brigades means that deployed units will require air support more frequently than before and must be ready to respond to such calls in every terrain, including urban environment, which require specialized weaponry and tactics, due to close proximity to friendly and non combatants. To respond to such missions air forces must use smaller, high precision weapons.

The prevailing military thinking has shifted dramatically since the end of the 20th century, when planners focused on the use of Overwhelming Force to ensure victory, (as vindicated in Operation Desert Storm, 1991) to the employment of Overmatching Power, as clearly proven in Operation Iraqi Freedom, 2003. With the efficient use of precision weapons networked employing sensors, intelligence sources and decision making levels throughout the theater, the emphasis has shifted from attrition-based campaign determined by numbers of platforms, to the aggregated effects caused by the weapon used. In this respect, four capabilities are emerging as keys features – Knowledge, Speed, Precision, and Lethality. These elements are currently guiding the transformation of the US forces, and are gradually adapted by many other military forces worldwide.

Speed: Speed of deployment to the theater, op tempo, speed of processing information and responding to time critical targets. The need for speed has regained the interest in heavy bombers which had lost their popularity since the end of the cold war. They were employed successfully in during Operation Desert Storm, and most impressively, during OEF and OIF, where mass coordinated attacks and pin-point strikes were employed by few B-52H and B-1B bomb loaded “trucks”.

Precision: not just the precision of weapon systems, but also the accuracy of information and targeting. Closing rapid cycles between sensors-and-shooters is a critical factor in the effective employment of precision weapons. This capability frequently requires the employment of special-forces teams on the ground, as well as ground/air liaison and coordination teams. During Desert Storm, about 30 Special Forces teams deployed on missions separate from the conventional force. In OIF, about a thousand men were closely wedded to conventional forces. By being able to carry out “precision decisions” these teams were located where the action unfolded, equipped with target acquisition and designation equipment, using opportunities for the employment of precision weapons.

Lethality:  is directly affected by the timeliness, precision and efficiency of modern weapons. It took an average of four aircraft to kill one target in Desert Storm, whereas in OIF just one aircraft could kill about four targets.

With the introduction of improved knowledge, speed, precision and lethality, the infrastructure and procedures of net centricity operations are also transforming – a critical aspect is planning – which has to be done faster, is also more complex, as human and machine factors must coordinate and are shared across many players, including conventional and special forces. The planning process should also be network centric – not limited to a single aircraft, weapon or unit but must also involve joint forces, and become more responsive to changing scenarios.